Preserving an icon: The Queen Mary 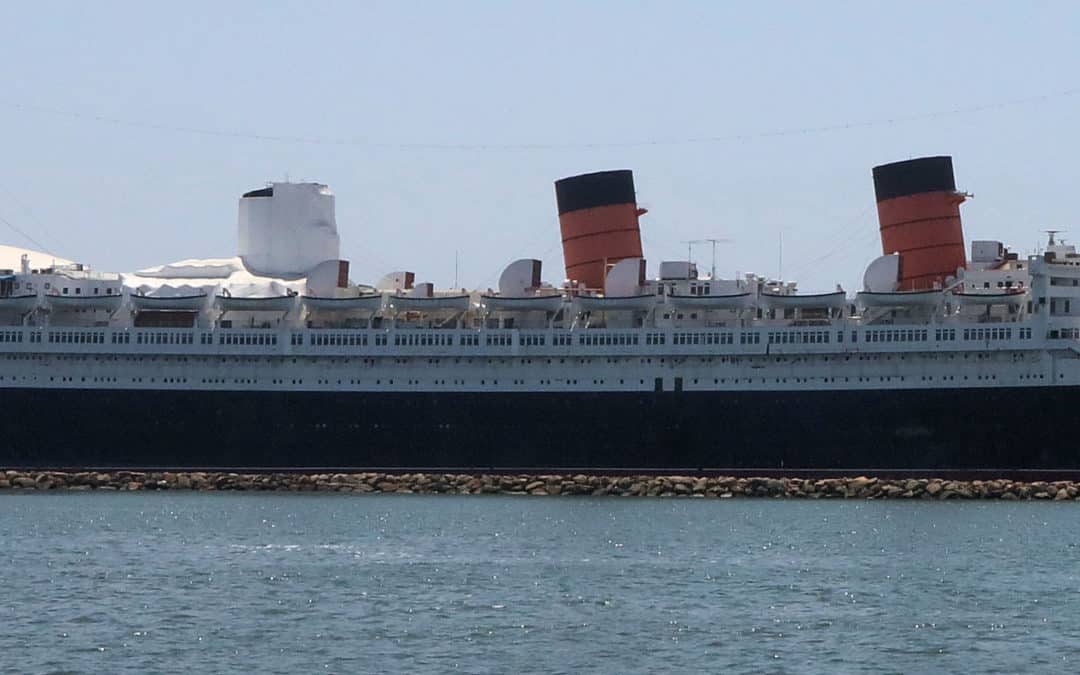 The Queen Mary is probably one of the most famous ships still afloat, but she was in need of rescue, and three companies have come to her aid 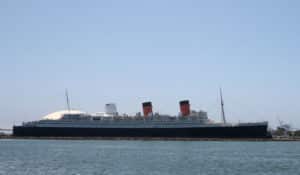 However, the iconic ship has been suffering a bit from neglect of late, and was in need of some serious tlc (tender loving care). The first of the three companies coming to her aid is Urban Commons. “We were assigned the lease in April of 2016 and in December we received a new lease from the city for a term of 66 years,” explains Dan
Zaharoni from the company.

He told PCE-International; “The City of Long Beach, where the Queen Mary is moored, had not had a condition or inspection report on the ship for some decades. So, in early 2016 they hired a group to come in and carry out a marine survey. They only spent a week on the ship, and walked around the ship making visual observations. A lot of the stuff that is in the marine survey is what the staff had told them needed to be fixed. They made a lot of assumptions and projections based on some visual observations that turned out not to be accurate. The number of 289 million dollars to potentially fix the ship is vastly overstated, and after being on the ship now for over two
years we believe the figure is closer to 50 million dollars.” However, one thing that was very apparent was that the ship was rusting badly, which needed urgent treatment if she was not to deteriorate further.

If the work was to be carried out properly, Urban Commons had to find a reliable contractor and that is where F Roberts, the second company involved in saving the ship, comes in. “We went through a pretty standard bidding process,” says Zaharoni. “We brought in about eight different contractors and showed them the ship, and gave them our analysis and a scope of what needed to be done. F Roberts was a company that we had a relationship with in the past, and they seemed to exhibit the best understanding of what needed to be done. Their
pricing was reasonable, and we just hired them after comparing them to the other bids.”

CORROSION PREVENTION SOLUTION
The next stage of the process was to look for a solution to stop the corrosion. “We spent about six to nine months looking for some type of rust inhibitor,” explains Zaharoni. “We knew that there was a tremendous amount of rust on the ship that needed to be remediated. But more than that, we knew that we needed to prevent future
rust occurring. Our hope is that the ship is going to be around for another 80 some odd years, and we knew that if we just removed the rust then we would fall back to the same situation.”

This is where the ship’s third saviour, and some would say most important company comes in. MAXON Technologies is a combination of top flight chemical engineers from MIT and Cornell University, corrosion engineers from the US Navy, and entrepreneurs with nearly half a century of experience selling the latest technology. The company both manufactures and distributes the coating selected to stop the corrosion. The coating in question is MAXON’s CRS, a penetrating anti-corrosive coating with oxygen scavenging properties.

The company claims that the biological ingredients in CRS effectively stop corrosion and prevent its symptoms for 10 years or more. CRS is safe for people and the environment. It is a waterborne, zero-VOC product with UL GREENGUARD Gold certification and LEED Platinum compatibility requiring minimal prep.

“We ordered a couple of litres of it to try out on the Queen, and the results were fantastic, and we made the decision to move forward and use it for the entire ship,” says Zaharoni.

One of the biggest problems when it came to coating selection was that of the problem with preparation. As Lee Greer, Chief Technical Officer at MAXON Technologies explains: “The Queen Mary project had a number of different problems: The first one is that it is a popular tourist location for the city – when people say Long Beach,  California, a lot of people initially think of the Queen Mary. The second thing is that it is  a convention centre, a hotel and it is a restaurant.

All these are operating at exactly the same time, so they were basically hemmed in with the ability to sand blast or do dry coating prep work because of noise, dust and material.”

To put it into perspective, about 26 tons of rust came out of the Queen Mary and several hundred thousand gallons of water came out of the hull before the repairs even started. “We got the job because our product is extremely easy to work with in regards to prep,” says Greer. “The prep has to be done properly, and well, but it is a lot less dramatic than sand blasting, grinding or needle gunning.” 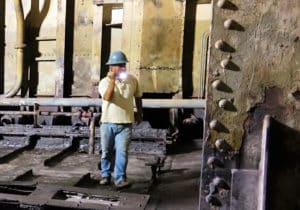 When it came to the inside of the hull; “we had a difficult process because there was so much corrosion, so it was pressure washed, and the water was removed as best they could,” says Greer. “We applied CRS to the interior hull and allowed it to cure, and then went ahead and put another couple of products on top.” The process was somewhat developed on the fly, as Josh Stofle of F Roberts Construction explains; “We worked hand in hand with Lee Greer. MAXON had some unique, very academic way of seeing their product applied and I sat down with Lee and said; ‘it is never going to work.’”

It wasn’t feasible to water jet or hydroblast inside of what is basically an occupied hotel. “So we had to really adapt. We removed all the scale coating we possibly could – and remember this is the inside of a hull of a ship,” says Stofle. “I can’t take a rivet buster or something that is going to do hard damage to a historical steel ship. That became the very complicated side of the job – removing enough corrosion that you got rid of the loose and flaking, but you didn’t remove so much that you were doing damage to the ship. That is why we needed to become a very cohesive group with myself, Lee and John Thomas, who is the historian for the Queen Mary.”

This cohesive group worked together to decide the best way to remove the rust without damaging the ship, even modifying their own hand tools where needed. When it came to the boiler rooms, each one was looked at individually, and assessed as separate project. “We broke it down into workable zones,” explains Stofle . “In one zone we could hydroblast everything, as we could collect the water, and other areas where the structure was pretty weak, we hand scrapped, which was very tedious.”

“We were pretty involved with the prep work because essentially, you have to remove all the loose rust,” says Greer. He told PCE-International; “we have a different concept of how corrosion abatement should occur. For the last 150 years, people have been using paint and epoxy to protect metal from the environment. Our bet is that the environment is tougher than any paint or epoxy. So we go into the metal rather than on to it – we are not a surface product – we actually go beneath the surface and remove oxygen from the metal itself. Our product has nano-particulates in it which allows it to go anywhere between 45 microns and 110 microns into the metal.

He does admit that people find this difficult to believe, and definitely think he is trying to sell them ‘snake oil’. “The biggest thing that people have to get over is the concept that you don’t have to prime, you can just power wash the area and you can put the stuff directly on the rust,” says Zaharoni. Stofle agrees saying; “There were a lot of sceptics that couldn’t see how it worked. However, I pushed the envelope of what the product would do, and every time we followed it up with test results, they went far and away beyond what I hoped they were going to do. That is what won me over.”

“It will go through paint and epoxy, and we have proof of that – with tests carried out at California Polytechnic State University,” explains Greer. This is backed up by Stofle: “We used a modified application of the coating, doubling the number of coats in some cases, and giving them a longer time to cure. This was followed up by the NACE Inspector coming in, testing to see if the coating had penetrated down to the depth expected, and the coating always exceeded expectations.” 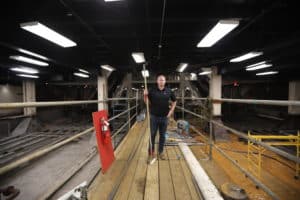 “If you look at it under a microscope, it is shocking,” says Zaharoni. “It seeps into the metal and seeps into the concrete, and whoever has been in this business for the past decades has been taught that this is not the way it works. The theory is that it is impossible for that to happen, and yet MAXON’s formula has found a way to achieve it.”

“The contractor Josh Stofle did a really good job, but I was required down there about three times a week just to make sure that everything was done properly,” says Greer. “Like any waterborne product, the paint edges are critical, and if we had failures, we needed to review the process and find the cause.”

He told PCE-International; “I have been back many times to look at the project, and the outside of the hull looks spectacular. There have been delays, and it is not finished yet, but we are getting there.”

“We probably sprayed 95% of what we have done, which is easily a million square feet,” says Stofle. “In some areas we have sprayed two coats, and that is the only protection they are ever likely to get. Very little of it had to be rolled – spraying fast is ideal. Like a good painting  contractor, you have to come off the gun at the end of each pass. You don’t want to double back because you are thickening up those overlap areas too much. The thinner the better for the product – you are better off doing two fast coats than doing one thick, heavy coat.

The equipment used for spraying was a couple of Graco’s Xtreme X70 units. They used 50m of 3/8 inch diameter hose supplying XTR-7 airless guns. The tip used in the airless XTR gun is a 519. This tip will cover a large surface with one single pass, its spray angle of 50Æ, and its orifice size of 0.019” offers excellent productivity.

Stofle told PCE-International; “We are in year one of an estimated five year renovation project. We have some areas that are in and complete, and we have other areas of the ship that have not even been touched yet.” 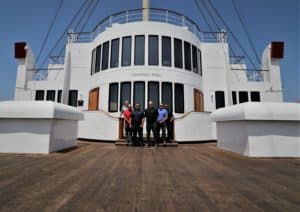 Zaharoni agrees saying; “the painting and coating that is occurring with the MAXON is around an eight to ten month process, and we are about five months into it now. We are doing the entire hull, and have currently covered about 75%. Then we will move to the ‘top of the house’, which is all the structures above the hull. Once that is complete, we probably won’t be using MAXON too much. However, we have literally covered the entire ship with it, and we have about a million square feet of floor area on the ship, so we’ve used quite a bit of it.”